Back at the turn of the century, Redbrook stream found it's way to much the same way as it does today. Redbrook stream drains much of the groundwater and run-off from area around North Bend Road, Gerald Road, and Wade Avenue west of the city of Ashtabula, with three small streams meet at the Country Club. Redbrook stream has provided water and drainage for countless farm fields and orchards as it travels to the lake since this area was settled before paved roads, cars, and boats.

The earliest use of the area we affectionately call "the Boat Club" was that of a picnic area that was rented to picnickers by the owner who lived in the old Gregory farmhouse on across from the present Boat Club. There are old newspaper accounts of one such outing from the late 1800's.

Historical photos dating back to 1907 taken at he mouth of Redbrook stream show boats being launched. There were no improvements at the stream entrance at that time and the hardy old boaters simply pulled their boats up a ladder like roller frames to a point where where they would safe from storms. Herb Dodge, the Club's first commodore, remember his family built and used three boats one summer because storms swept away the first two.

The Yacht club acquired about six acres at the entrance to Redbrook stream in the early 1920's and began to improve the stream entrance at . By 1924, the pier walls were installed which are still in use today. Yacht Club continued making boating improvements and soon needed a larger facility.

In 1946, Yacht Club was relocating to the next to the old Car Ferry Dock and the Redbrook location continued on as their 'small boat division'. In 1952 the founders of the present club purchased the property from Yacht Club.

By 1985 RBC had acquired another seven acres of adjacent land which allowed to make major improvements that are currently enjoyed. Bulkhead redesign was begun and completed in 1994 with out any debt.

In the fall of 1996 Club members approved the construction of a new 4300 sq. ft. clubhouse overlooking . This was a major step in providing first class club facilities for members and their families. The new Clubhouse was completed in late 1997 and opened May of 1998.

The above picture is from a Vintage Post Card stamped .  It was mailed on from Geneva-On-The-Lake and is postmarked with a 3 cent Stamp.  On the back of the card it says: " ".  The card was printed by C.L. Carle Wholesale Co., Distributor, Ashtabula, Ohio 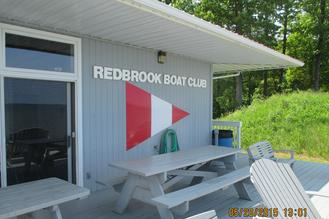